Not long ago, a lady called out Yoruba men, said they are heart breakers.

Now, another lady with the username @aphrodiety__ on twitter has called out Igbo Men, she said they are misogynistic.

Meanwhile, while some women agreed with her, Igbo men are not having this generalization at all as they flooded her timeline to tell her she’s wrong.

“Igbo men are generally insufferable and very misogynistic, subtly or not. You’d be lucky to find one who isn’t.

I actually don’t know who’s worse between them and men from the north.

At least, the Northern ones like to marry women who can manage their rubbish. Igbo men?” She wrote.

“They’ll want to marry a woman with a mind and spirit of her own then “tame her” or “call her to order”.

“The obsession with being in control is wild.

If you’re lucky enough to find one who isn’t, hold on to that unicorn tightly.” 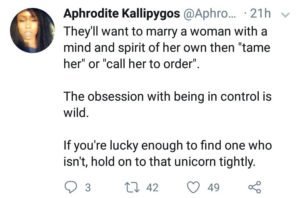 @iykimo you are triggered, they have used the same word to slander Yoruba men.

I think it has to do more with individuality and of course literacy than being an Igbo man thing. The Igbo men that I’ve seen with this trait you mentioned are mostly the illiterate business ones, though not all.

I am proud misogynist IgboMan.. “That this is what I want in my roof is not too much to ask “ ??‍♂️. Well, we can as well agree to end it there

You sef get wàhálà. No be book you suppose dey read? But your igbo woman wickedness no let you see road. Leave our kings alone! pic.twitter.com/zqLAsXy2Sw

@Aphrodeity__ spot on girl.even the ones that approach you and you genuinely fall inlove with still end up being an idiot once you are in.They can tolerate anything from you just to get you in,then you will meet face to face with the devil himself.

Such a shallow way of reasoning tho. Been thinking how many igbo men you've dated to generalise that shallow, pity my sorry ass crap

Hilarious: Man Recounts How He Managed To Discharge A Lady Who Overstayed Her Welcome

Everyone is my friend, I’m chatting with Amaechi on whatsapp right now – Dele Momodu