—- In the midst of the drama, Speed Darlington found a perfect time to shoot his shot.

—Making reference to the revelation on Tonto’s interview where she said her ex husband has premature ejaculation and is a 40 secs man. Speed Darlington declared himself a 40 mins man.

Tonto Dikeh has accused her ex husband, Churchill Olakunle of so many things. Of being a fraud, a diabolic yahoo yahoo, a son to Obasanjo’s gardener. And a man who ejaculates after 40 secs.

Speed Darlington after hearing this revelation declared himself a good partner for Tonto. He said he’s a 40 mins man and Tonto will never lack sexual pleasure.

He put up a video on Instagram laughing at the revelation that Churchill Olakunle, as claimed by his ex wife ejaculates prematurely.

Speed Darlington is shooting his shot and we will be here to report Tonto Dikeh’s reaction.

Read What Speed Darlington Said In the video:

“I am Mr. 40 minutes. I smash this girl sote my knee was burning. You will never lack any pleasure with me. It’s not a bragging game.” 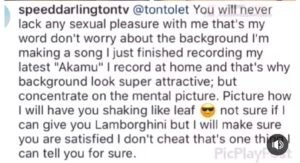