When people talk about the best football players to come out of Australia, you will hear names like Mark Viduka, Harry Kewell, Mark Schwarzer, Lucas Neill and Bret Emerton. Younger folks will be more familiar with the likes of Matthew Ryan (Brighton), Matthew Leckie (Hertha Berlin), and even Mile Jedinak (Aston Villa). For me, the one that stands out, literally, is the guy that sits on of the national team’s scoring charts: Tim Cahill.

Just yesterday, he announced the end of a football career that had seen him play in Australia, England, USA, China and India. Picture this: he played for Samoa as a youth but became a legend for Australia. He started out in Millwall but became an Everton legend. He remains the only Australian to score in 3 World Cup tournaments. In summary, Tim Cahill enjoyed an exceptional career.

I saw him play for the first time against Sunderland in the FA Cup. This was 2004 and it was the semi-final. The game looked dead on for a penalty shoot-out but he took advantage of some careless defending to score the winner. The enduring image of Neil Harris hugging him, after he ran the full-length of the pitch to celebrate, was really heartwarming.

Fast forward some months later and he was in the English Premier League with Everton. There wasn’t much to expect from him. He was a midfielder with bags of energy to get up and down the pitch; with the ability to nick a goal once in a while. Like a poor man’s Frank Lampard…except that he was so much more. For a small man, he could REALLY jump. It’s ironic that he scored a lot of headed goals in his career.

Injury issues caused Everton to move him to a centre-forward position and he became a phenomenon. Who would have guessed he would adapt the way he did? It was clear after a few months that he put in a lot of work into pushing his abilities to their limits. Everton fans loved him and neutral fans admired him…except when he was scoring against their favourite teams. 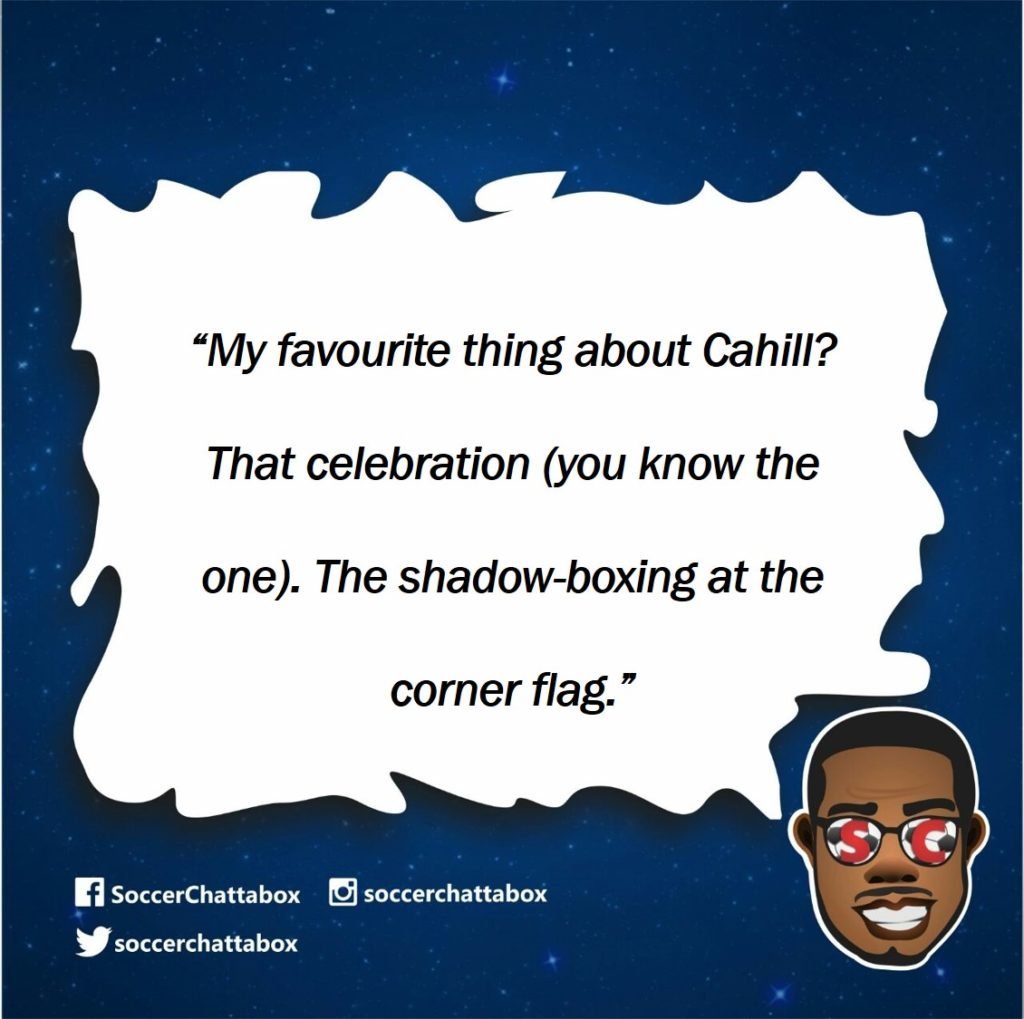 I think about his goals. I don’t know about you but it was clear that he put in a lot of effort to making sure he became more decisive in front of goal. He scored all sorts of goals and it looked he was adding new ways of scoring to his game. His technique was so underrated; look at the volleys and overhead kicks and you’ll see that he should be up there as one of the most talented footballers to grace the game.

Australians will always be grateful to FIFA for the allegiance-change rule. This allowed Cahill to switch international allegiance from Samoa. I watched him score in the 2006 FIFA World Cup against Japan, against Serbia in the 2010 FIFA World Cup and against Netherlands in the 2014 FIFA World Cup. All goals were memorable because he was the one who dared to push himself on the world stage. He even gave Australia two (2) trophies (for those who slammed his lack of honours).

My favourite thing about Cahill? That celebration (you know the one). The shadow-boxing at the corner flag. I wanted him to score in games…just so I could see that celebration. The effect it added to the occasion was so special that I wanted to watch him every time.

He may not have won many trophies or topped domestic league scoring charts. He may not have played for the world’s biggest clubs, but he was one of the biggest talents to light up my screen…and I will always be grateful to him for that.

Falcons’ saga: They weren’t paid because we didn’t expect them to win – minister