The singer sang his song, “This Year (Odun yii)” in 2012 while Zlatan recently released his own with the same title. Jaywon accused Zlatan of copying some of his lyrics and the concept of his video.

Zlatan responded when people brought it to his attention, “He can’t be talking to me,” he said, “If na me na my page he go write the comment”.

Jaywon blasted the “zanku” crooner, inferring he his a dumb child.

“The same lines, video concept Lool not even talking about the title but no, dis dumb children on dis platform only follow trends but una papa. If you see me for road make you come talk to me. No be only slap you go chop you go chop belleful

“If e pain you, I Dey my house make you come beat me but I don talk Wetin I talk. Who no know before don know and who no wan gree know OYO.” 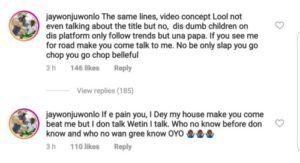 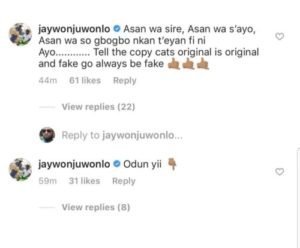 Ifuennada Questions Why “Husband House” Is Such a Priority