Nigerian singer, Jaywon reveals he was robbed in a club in Ibadan, Sluggers and complains about the manager’s reaction to his attack.

The singer wrote on Instagram that he and his nephew were robbed at the club and the manager acted like it was not ‘his concern.’

“Deadest club in ibadan. Don’t go there ooo. Me and my nephew got robbed right inside the club compound (Club Sluggers) and the manager still have the mind to fight us. Go there at your own risk,” he wrote.

In another post, the singer complained about the manager of the club. He also insinuated that the manager allegedly paid a blogger to attack his claims of being robbed in the club. 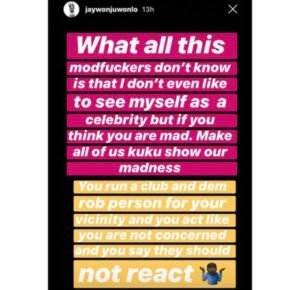 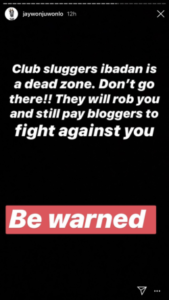 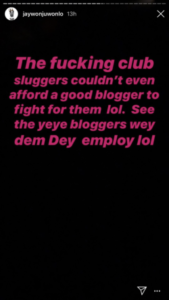 Funny: Mayorkun And Dremo Perform A Social Experiment With Money In Lagos (Video)

Jaywon Gets An Early Birthday Gift For Himself