Legacy Films Video Director has claimed that singer Joeboy took his idea for his video without  acknowledging him.

According to him, he ran into the Joeboy in an airport and showed him the trailer of a video he’s working on. He claimed Joeboy stole the idea of that video he showed him for his new song, ‘call’.

“@joeboyofficial nice one on your music video but u didn’t give credit to who inspired you to do a movie type music video trailer. I ran into you at the airport in January and we watched holmes magician video trailer together. Cute (in Sarz voice) but my video was better ??” 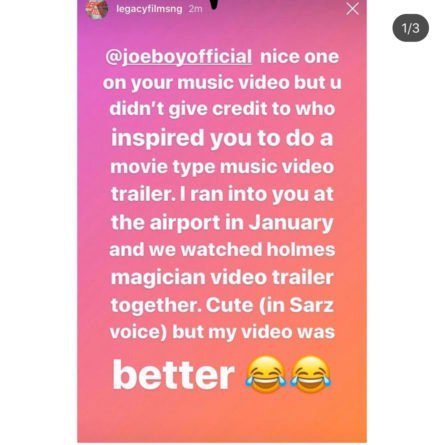 “Even If The Lockdown Is Extended For One Year, I Still Dey” – Bobrisky Mocks (Video)

“If I Wanted To Go Under The Knife, I’d Do It With Pride” – Comedian AY’s Wife, Mabel