Nigerian journalist, Kemi Olunloyo claims in her new tweet that a popular Nigerian artiste will be invited to the EFFC office this week.

According to her, this anonymous artiste is allegedly involved in some some shady activities and could be moving money for a politician.

”A popular music artiste in Nigeria will be invited by the EFFC this week. He has been into some shady transfer of money. Could be moving money for a politician. All that glitters is not gold in Nigeria’s music industry. You don’t even need to guess, he’s one of your faves.” 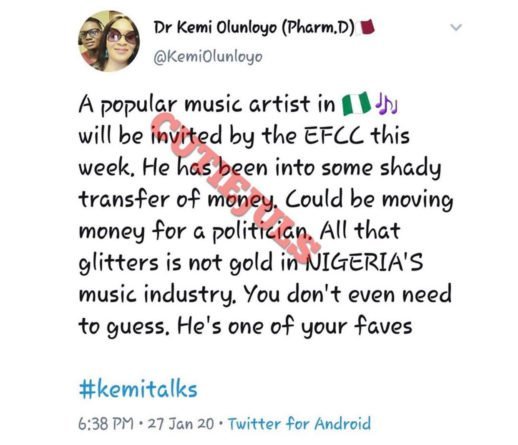 The journalist was also in the news recently after claiming Davido might never marry Chioma once he finds out ‘ugly things about her”.

Davido Buys Imade A Bicycle As She Graduates From Kindergarten (Photos)