Twitter users react to news that a lady named Esther is planning on infecting innocent men with HIV after getting infected herself.

As seen in the screenshots of her Whatsapp conversation that surfaced online, the lady revealed she was infected by her ‘Sugar Daddy’ and has no plans to inform her parents about it.

She also told her friend whom she was chatting with to keep her status a secret and promised not to spare any man that comes her way.

‘I’ll make sure I destroy as many guys as I can before I die,” she wrote.

See their conversation below; 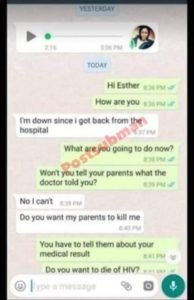 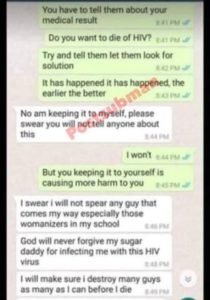 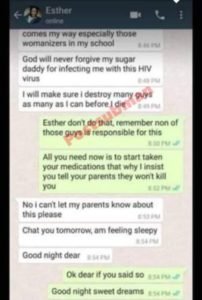 See some hilarious reactions to the leaked chats below;

Me: Hi pretty
Pretty lady: Hi handsome
Me: how are you, what you up to here?
Pretty lady: relaxing and enjoying nature, will you mind sitting down so we can chill together
Me: Awwn, pretty and kind
Pretty lady: I’m flattered
Me: what’s your name btw
Pretty lady: Esther v..
Me: https://t.co/fvKfBQ9e6r

Men wey dey go look for olosho,shebi wuna don see?????That her name is esther is not a determinant,she might be changing names as she spreads her disease.Beware???? https://t.co/gW6ZlHWppw

Girl : my name is Mercy

Girl : my real name is Esther tho and I'm that girl that trended on twitter

What would you do as the guy ? pic.twitter.com/Qgc5rIfJls

Her: hey dear my name is Esther and…

see this yeye Esther o…and its sugar daddy that gave her this thing now she wants to give us young guys…its God that will punish you…you will tell me who send u message https://t.co/E3pxZ6riG1

Photographer Made To Modify Her Outfit For A Church Wedding