A Nigerian lady identified as Bolaji Billions on Twitter narrates why she slapped a bus conductor in Lagos.

She wrote that she was tired and had leg pains when she stopped a bus. The conductor charged her higher than usual however she didn’t mind she was in pains and just wanted to get home.

2 bustops away, a new passenger was picked and the conductor insisted that his heavy load be kept under the lady’s leg.

She refused, complaining about her leg pains. The conductor in reaction then pushed her leg to keep the load and the lady slapped him.

“I just didn’t know what came over me. I felt bad after I came down from the bus sha.
Imagine I tried that in Oshodi ?? them for beat my life. 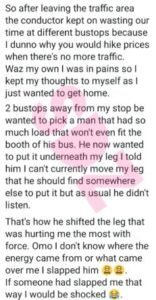 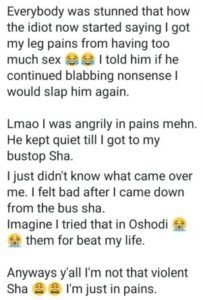 Photographer Made To Modify Her Outfit For A Church Wedding