Nigerian actress, Etinosa fires back at people questioning the Benz Gift she got in Dubai.

This is coming after Duncan Mighty insinuated that the actress lied about the gift because she’s seen driving a Toyota Venza and not a Benz.

In reaction to the claims, the actress revealed that she has 3 cars and she has never claimed to be filthy rich.

“You people should leave me alone o. I was on my own now and they have come to look for my trouble. Lol, so it’s only one car I’m supposed to have in this live? Monitoring spirits, let me declare my assets. I have 3 cars.

“One Honda accord 2007  which I’m thinking of selling or dashing my little bro.” 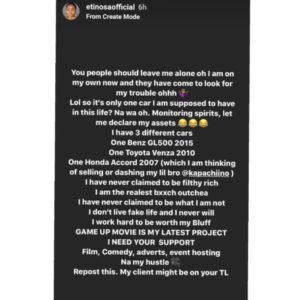 The actress also blasted Duncan Mighty for jumping into conclusions when he could ask for clarifications. 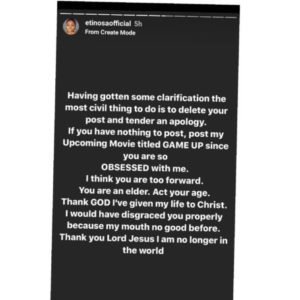 Meanwhile, in a chat with a follower, Etinosa disclosed she’s yet to ship her Benz gift because she doesn’t have the money yet. 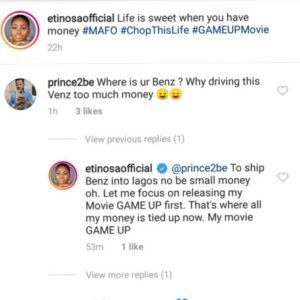 “Your Market No Go Sell, Get A Life”- James Brown Blasts Etinosa (Video)