Barcelona will be seeking another win when they travel to Levante for their last 16 Copa Del Rey tie on the 10th of January. They will be looking to retain the cup for a fifth consecutive year should results go their way. It could be said that they have their name written on this cup.

Winners of the 2017 Segunda Division and 15th on the log last season, Levante have beaten expectations this term by staying 10th on the LaLiga table. The Frogs have lost just seven of their 18 top-flight matches so far. That said, their penultimate match last year was against this same Catalan side who thumped them to a 5-0 victory. They were battered, thrashed, downtrodden-get me some other synonym for these. It didn’t matter that they were playing at home.

The Copa Del Rey doesn’t offer them that glimmer of hope they deserve still. Their last tie in this competition had Barcelona thump them to a 9-2 victory over a double-legged tie.

A win in this one could see them on the front foot for this two-legged tie however. Should we wish them goodluck? Before that, here’s a look at their recent run of form in all competitions. 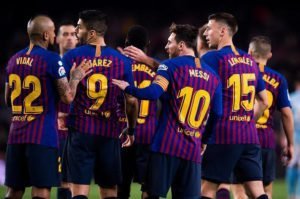 The Blaugrana will be coming off the back of a win against Getafe in their LaLiga fixture. In this competition also, they knocked out third division outfit, Cultural Leonesa with a convincing 5-1 victory to find themselves at this stage of the competition. The Catalan giants have beaten Athletico Bibao, Sevilla (twice) and Alaves in the four most recent finals. They were built for this competition. As a matter of fact, heir last defeat in this competition was as far back as 2014 against Real Madrid.

Barcelona have been prolific this season- the La Liga, Champions league and Copa Del Rey. There’s no stopping them this term. In as much as they would like to retain this trophy, they would above all be more concerned with their next round of fixtures in the Champions League. There is therefore no questioning that Barcelona could trade the Copa Del Rey title for the more prestigious Champions League. This is similar to what some English fans claim Liverpool has done-trading the FA Cup for a possible go at the league title.

However, Barcelona wouldn’t be involved in UCL action till February. They should therefore go for a win here.

Absentees for Levante include Cheick Doukoure, Armando Sadiku and Pedro Lopez. Borja Mayoral, the loanee from Real Madrid would be pushing for a start. Second team players in Moses Simon, Aitor Fernandez and Emmanuel Boateng should be handed chances to impress. They however have no injuries from their last game against Girona.

On the other hand, Rafinha, Umtiti, Samper and Vermaelen are still out with injuries. It is likely Malcom, Coutinho, Alena and Semedo are also handed starts for this one. Youngsters lie Juan Miranda and Chumi Brandariz are also likely to feature.

Barcelona should get a win with a two goal margin.

Umtiti Rejects Rumours Of Being Used In Bargaining Plans For Neymar

Highest Paid Players in the World 2018