The Delta State Police Command has arrested a man who raped, drugged and impregnated his 15 year old daughter with the knowledge of his wife.

He was arrested alongside with his wife and will be charged to court on the 8th of July.

Activist Gwamnishu Harrison revealed that this had been going on since she was 10-year-old and her mum told her to keep quiet when she informed her.

“While lending voice to #Khloe in Abuja, we received a disturbing complaint from Alvadora Help Foundation about a 15year old girl been sexually abused by her Father.

“Our team led by BBI Delta State Director Iyke Omenogor quickly reported at B Divisional Police station Asaba. (BBI Complainant). The victim was raped when she was 10 by her own father who drugged her food. 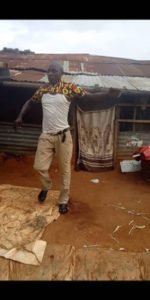 “The victim. She told her mother but was told to keep quiet. The abuse continued, pregnancy removed, the daughter became a second wife and a sex slave to her own father who ought to protect her.

“She said. “I just see myself wake up tired, with blood/Sperm all over my private part. My mother is aware of everything, my grandparents are aware, my elder brother is aware and our pastor also aware”.

“The victim is now in our facility currently undergoing therapy and medical treatment. Your support will be appreciated. Her father and mother are currently in Police custody, the case will be charged to court on Monday 8th June, 2019.

“We urged Delta State Government to partner with us in the #WarAgainstPeadophile as we build sexual assault centre for victims.”

Vice Principal Calls Out a Student Over Disrespectful Chat on Facebook

Toolz Shares Funny Experience She Had With A Stray Cat