A man identified as Marvin Enwelikwu on Facebook revealed he tied up a lady’s braids for insulting him after he asked for her number.

In the picture he shared, the man was sitting behind the lady and tied her braids to the chair. He revealed he would be dropping before her and decided to ‘pay her back.’

“I asked of her number she started insulting me, no other option to pay her back than to do this to her because am dropping at the next bus-stop. Next time she will learn how to talk to gentlemen did I do anything wrong I hate nonsense”, he wrote. 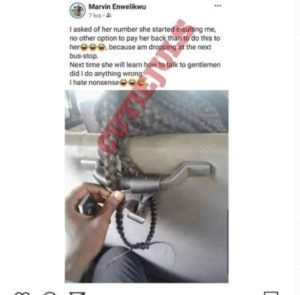 Nollywood actress, Moyo Lawal announced in new post that no man she’s dated has ever left her.

Man Arrested For Fondling Lady’s Breast In a Bus

30 Naturalista Hairstyles to Stand Out This 2022