Manchester United are set to welcome Arsenal to Old Trafford on Wednesday in the premier league during a difficult period for the club. The Red Devils have failed to win any game in three matches and pressure is on to deliver on wednesday.

Arsenal travel to the North-West after a 12-match unbeaten streak in the top flight, with their latest victory coming over Tottenham Hotspur on Sunday afternoon.

United begin the week eight points adrift of Arsenal, while there are just two points separating the North-West outfit to 10th-placed Watford.

Man Utd were forced to stage a comeback in the weekend against Southampton after going 2-0 down in what has been a regular and familiar pattern of games for them.

However, the club’s hierarchy and supporters do not want to be content with praising comebacks, and Mourinho needs to get United playing with pace and tempo if they are to receive any prolonged praise from behind the scenes and in the stands.

Should United lose the match on Wednesday, it would leave Mourinho and his team with just two wins from seven Premier League matches and, more importantly, lead to the club being at least nine points behind the top four. 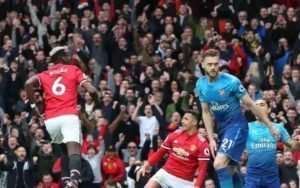 Arsenal were not as great against their neighbours on Sunday afternoon, especially in the first half, but fighting back from a 2-1 deficit to record a convincing win garnered praise from proponents and critics alike.

Unai Emery was heavily criticized when his team drew Wolverhampton Wanderers earlier last month but he proved once again that his methods are working, especially against compact teams like Tottenham.

The Gunners will be looking to replicate that amazing match display against hosts Manchester United in Old Trafford and what bettet time to do it than now when United are in a shaky form.

Granit Xhaka will serve a one-match ban, which should pave way for  Matteo Guendouzi in midfield. Mesut Ozil could make a comeback after missing the game against Spurs.

Ramsey could come into the team ahead of Henrikh Mkhitaryan or Alex Iwobi, while Alexandre Lacazette is also in contention for a recall to the team.

Wednesday’s encounter is the 228th competitive clash between the two clubs, with United having won 98 times in comparison to 82 wins for Arsenal.

Loftus-Cheek Ruled Out Of Europa League Finals With Arsenal