Nigerian singer, Zlatan goes savage on a follower who begged him to help with his school fees.

The follower tweeted at the singer informing him that he just got admission into Yabatech after 6 years and he’s unable to pay his school fees.

“@Zlatan_Ibile I swear I just got admission into yabatech after waoting for 6 years Admission fee and school fee na him be problem now I have proof of admission,” he tweeted.

In replied that maybe God doesn’t want him to go to school as he didn’t finish his education either.

“May be GOD NO WANT MAKE YOU GO SCHOOL !Me sef no finish,” he replied. 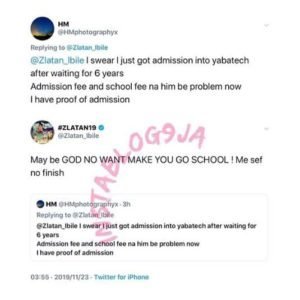 Zlatan was also in news recently after he announced that Davido gifted him a chain worth N14 million.