Bread-seller turned model, Olajumoke has changed her name from Olajumoke Orisaguna to Olajumoke Chris. Officially announcing her separation from the father of her children, Sunday Orisaguna.

She came into limelight in 2016 when TY Bello found her amongst the pictures she took of Tinnie Tempah while she was hawking bread. This led TY Bello to look for her,  have her model while she took photos of her.

Her story got her several deals with model agencies. Afterwards, there was a break out with her husband. Although news say they were never married.

The baby daddy once revealed publicly that she no longer respect him after her fame.

The parents of two are officially separated as the model changed her last name to Chris.

This got the attention of people and she fires back at those who criticized her for leaving her husband.

“Start by showing love to your husband and kids. Husband is the head of the family.” one wrote.

“This is none of your business. Go and take care of your family if you have one.”  the model replied.

“Just because of small fame and shekele money, you divorced your husband. May be Okonjo Iweala and Alakija should have divorced their husbands as well. Instead of you to bring your husband to your new status, you are divorcing him. Ol*sho!!”

“Before I block you, let me wish you something nice, every misfortune that I was able to escape together with all the misfortune I’ve suffered will be your portion.” 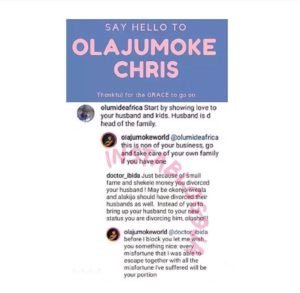 Also in the news is how Olajumoke was gifted N400k by Harrysong for dancing to his song, ‘Chacha’.

Pastors Have the Number to Shut Down Any Blogger – Apostle Suleman