Nigerian cross dresser and dancer, James Brown has decided to talk about his mother as he’s about to turn 21 in a few hours. He said in a video he shared on his YouTube channel that every birthday reminds him of the day his mom said she doesn’t want him. 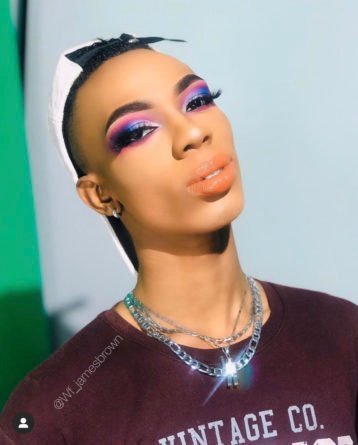 According to him, his mother never liked him because she and her husband didn’t plan to have him. He also said that it was bad to the extent that it was his grandmother who breastfed him.

However, James Brown mentioned that his mum has been begging him for forgiveness.

”I’ve forgiven my mom but I don’t have anything to do with her because for the past 3 years she hasn’t been in his life. To me my mum is dead because she doesn’t give a damn,” she said.

Skull Breaker Challenge: Doctors Warn It Could Kill, Many Get Injured

“I Stand With Hushpuppi” — Bobrisky

“Now That I Have Kids, I’m So Scared For Them”- Nigerian Educator, Chiamaka Sylvia Accuses IK Amaliri and His Friends Of Gang-Raping Her