The Nigerian rapper was arrested by EFCC on May 10 with four other of his friends including Zlatan and Rahman Jago. However his friends were released while the court charged him 11 different counts of offences.

Two weeks ago, his bail application was approved for a 2 million naira bonds and two sureties pending his trail scheduled to October.

Many of his fans, called ‘Marlians’ spoke against the singer’s arrest. Once, a video surfaced online of some fans protesting in front of the EFCC office on a weekend chanting “free Naira Marley.”

In appreciation of the support, Naira Marley thanked his supporters and confirmed he has been released.

“Fresh home. Thank you for the support Marlians. I love y’all.” 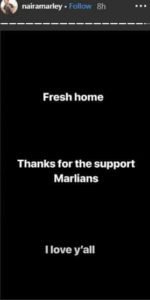