— Nigerian Lady called out Airtel on twitter, complained their adverts are tribalistic.

She argued that their adverts portray tribalism.

In the adverts by Airtel, two women, mothers to husband and wife were exhibited as subtle enemies.

One was played by actress Ngozi Iwosu, she played the Bride’s mother, a woman who has evolved, using blenders, autogeles and selfie sticks.

The other was played by Idowu Phillips popularly known as Iya Rainbow. She played the Groom’s mother who preferred the mortal to blenders, prefers the traditional way of tying gele and ruined the kitchen when she tried to use the blender. She was portrayed as a woman who isn’t ready to embrace the evolution of the world.

The advert was to pass a message that 4G network is better that 3G. “Life evolves, you should too,” is the end note of the adverts.

However, a Nigerian lady feels there’s more to that. She was concerned about why the Yoruba woman had to play the moronic part.

She stated that adverts are a representation of the society and misrepresentation can be internalized by the viewers especially young kids.

However while she argued this, people who opposed her opinion argued that Airtel didn’t state the tribe of the women in the adverts and how we choose to interpret the ad isn’t the brand’s fault.

Read Her Thread Below:

I think I have had enough with @AirtelNigeria commercial making the Yoruba woman look moronic.
She’s the one that doesn’t know how to use blender, water dispenser, Auto galé even traveling box…Whyyyy? 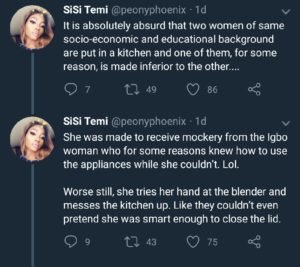 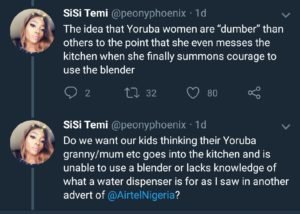 I would have agreed that the advert have a tribalism undertone if Igbo and Yoruba languages were used in it. You made this point because you know the tribes of the women. Would someone else Who doesn't know their tribes have the same opinion with you?

IMO, I think it wasn't tribe that was being represented, it was generation. The yoruba woman happened to be the older wife, representing an older generation.

Older generation of parents battle to operate even phones, when the kids, or younger parents handle them effortlessly.

I see many people coming at you for tweeting this. But I have also been wondering the same thing. Why the Yoruba woman is always portrayed as dumb.

They don't even try to swap their roles. Here's a short video compilation I did of their ads. pic.twitter.com/tCuXhzyQSi