Does it mean that more men suffer from depression than women?

Depression is a psychological epidemic that affects the human mind and brain simultaneously, it becomes worst when such individual doesn’t have some he or she can confide in, it has led many young chaps to their early grave while many others have suffered an unending psychosis.

This is a catastrophic attack on our dear Nation, and people have been advised to look out for people and try as much as possible to get them out of their depressed state.

In view of this, a Nigerian lady identified as Enderlin Chinenyenwa Ambrose devised a means she feels is best for helping depressed people. She decided to offer a free sexual service to every man who is depressed, she made the shocking declaration via a post on her Facebook handle and dropped her number online for people who need her service to be able to reach her.

However, Enderline got the shock of her life after her phone battery now experience a short life span each day due to the number of calls she receives from people who claim that they are depressed and seriously needs her sexual service, isn’t that amazing?

In her words, Enderline believes we have men who are sex drought than people who are actually depressed because, at the mention of free sex for depressed people, everyman became depressed to get free sex. 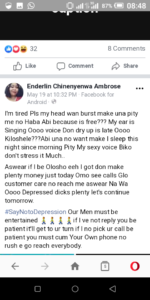 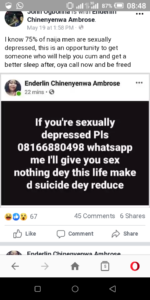 Photos Of Couple Involved In Murder-Suicide Incident In Lagos