Nigerian Twitter user reveals a woman is in shock after she found out her newly married husband has no penis.

He explained that he has a  certain medical defect thus had no penis since birth.

However, he never told his fiancé and she only discovered after they got married.

Shockingly, the man revealed the woman is being persuaded to bear his children through her husband’s brother.

“A lady just separated from one of my village brothers. The reason/cause: Inability to consummate the Union, he was born with a defect (no penis). She’s persuaded to bear him children via his brother.

“Ladies, please check him before you say yes,” He wrote on Twitter. 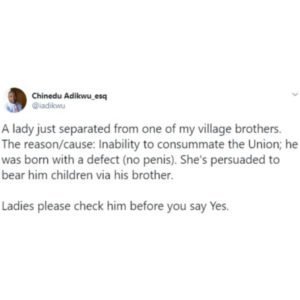 Simi Apologizes Over Her Statement About The LGTBQ Community