Comedian Victor Ebiye is receiving the heat on Twitter after body shaming a woman again.

A Twitter user identified as @bigchefenkay recently shared a picture displaying her buttocks in full. Although she later deleted the picture, another Twitter user reposted it and Ebiye made a comment body shaming her. 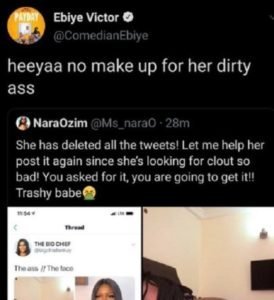 This isn’t the first time the comedian would be on news for body shaming or slut shaming a woman. He once accused singer Aramide of sleeping her way to earn an award. Last year, he colour shamed actress, Lupita Nyong’o.

Many have blasted this comedian for constantly body shaming ladies.

See Some Reactions Below:

Ebiye's humour might not be consistent but his stupidity is.

Somebody remind Ebiye… Today is roughly another 6 months! https://t.co/cxq3PwyRFk

I’m even darker than that babe. If I post my ass Ebiye and Nara can come to my house with gun.

"Comedian" (and that's the real joke, calling him a comedian because lewl) Ebiye needs to sit at the feet of Jesus and ask him to come through with divine intervention.

Body Positivity Twitter are having an In House Fight & Ebiye from nowhere came to slot himself into the mix. Lol seems he likes been dragged ffs. Light Skin Babes will be getting roasted today BTW ?‍♂️

I cancelled Ebiye since that Aramide joke. Dude issa clown

– Ebiye doing all he can to ruin the reaming 6% left of his career..

‘Church Of Satan’ Educates Man Who Wants To Join Illuminati