Nigerians slams Nollywood actress, Eniola Badmus for refusing to self-isolate after returning from the UK.

We reported a few days ago that the actress made a video saying she’s stuck in London because of the Coronavirus pandemic.

However, she has now returned to Nigeria and was hosted by Funke Akindele without self-isolating. 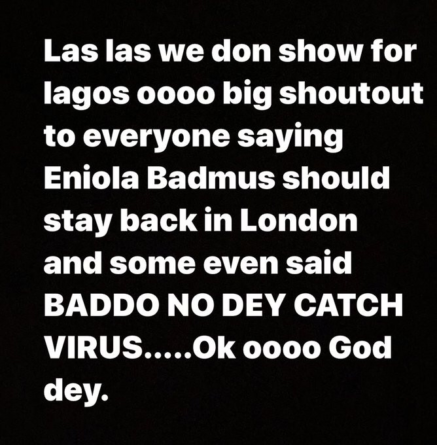 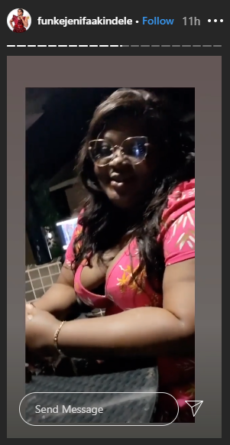 This goes against NCDC’s directive of 14 days self-isolation for travelers who just returned from high risk coronavirus countries. UK is among the regions categorized as a high-risk Coronavirus country.

Many have called her out on Twitter over this and she replied saying she “is fine” and had to “drive in her own car to visit a dear friend.”

Eniola Badmus: "Ahh that's true o. You know you can never be too careful"

These people already came in contact with at least over 100 people.

Eniola Badmus should be quarantined. She got back from the UK last week and she was on set with funke Akindele.

@funkeakindele is in the NCDC orientation video yet she hosted Eniola Badmus who just returned from UK and is supposed to be self-isolating. It’s very irresponsible.

Plus, weren’t attendees of AMVCA asked to self-isolate?

Without being tested or anything. Went to Funke Akindele's house (the face of NCDC'S & Dettols Coronavirus Campaigns)

& they all had a beautiful gathering of sharing _Colona Vilus_

So Eniola Badmus came back from UK, went on set two days later without isolating herself, Dami called her out and they nabbed her account. But na them go dey complain about government meanwhile they're still exhibiting similar characteristics. Mtcheeew

We aren't going to let slide the fact that Eniola Badmus flew in from a country with over 5000 confirmed cases of coronavirus and has refused to self-isolate. pic.twitter.com/K0dNdk0HDS

“After 4 Horrible Miscarriages, God Restored Me in Every Way” – Actress Tomi Odunsi

Tory Lanez Calls Out B. Simone Over Her “No 9-5” Comments – “A Lot Of People Who Work 9-5 Get More Money Than Our Favorite Entertainers”