Yesterday night may be an unforgettable night for Wizkid as his fans in Ilorin couldn’t get their hands off him.

Wizkid performed at Ilorin, Kwara State yesterday at an event and his experience and reactions from fans is currently a hot conversation on Twitter.

Firstly, Wizkid was seen sitting on a plastic chair under a canopy and some complained that a superstar like Wizkid should have been offered a better seat.

Also, as Wizkid started to perform, several fans trooped out on stage to get a hug from him. It was overwhelming at a point as many started grabbing and pulling him in an attempt to hug him. However, the bouncers were able to rectify the situation. 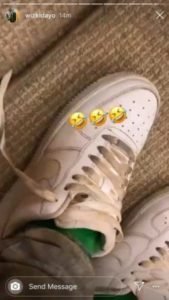 Wizkid is a star, some of them haven't been privileged to see wizkid, no one is taking about the love they showed wizzy, they rather focus their attention on some petty things that he sat on plastic chair yen yen yen and so fucking what. Better things are left unsaid.

Come to think of it #Ilorin people gave wizkid plastic chair to sit what if it was zlatan Ibile oboi na for mat him go sit be that , what if it was small doctor… Hah Lemme just stop there ??

Wait what event paid Wizkid to come to #ilorin ?

I’m trying to understand everything. And man still had to go back to Burna’s show later this night ?‍♂️

The money must be really plenty !

Reporter: How was your show in #Ilorin?

Instablog: Wizkid seen auditioning for an Ilorin based Cultural group months after he Sold out o2 Arena#ilorin pic.twitter.com/1g1D7J2MD3

“I Put My Close Friends To Test, Lied To Them I Lost My Job And My Fiancé Was The First To Abandon Me” – Man Laments