Many were not having it when a flier showed that MC Oluomo, the chairman of Lagos State’s National Union Of Road Transport Workers (NURTW) is a special guest at an event in UNILAG.

Many are of the opinion that the leader of transport workers should not be giving a speech at an event meant for students.

However, some don’t see anything wrong with it. Some also believe many were quick to jump to conclusion as the event is about transportation and MC Oluomo would know about it based on his experience and job. 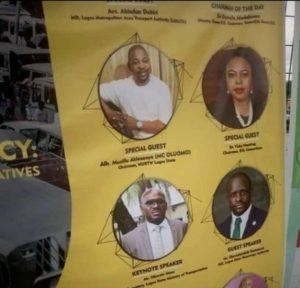 See The Mixed Reactions Below:

People are criticizing Unilag 4 inviting MC Oluomo as a Special Guest to an event which is based on transportation.

Firstly,McOluOmo is the chairman of NURTW in Lagos State ,so he def knows one or two about transportation,
Because he isn’t a graduate doesn’t make him a dullard.

Some of you people were even cultists when you were in University and now you are crying on Twitter that Mc Oluomo shouldn't be giving lectures at Unilag.

You wey dey keep weapon for your ceiling that year, hypocrites.

Those defending the invitation of MC Oluomo to speak at an academic forum in transportation are the same people who eulogize the unquestionably vacuous BOO-hari as Nigeria's President. You then wonder why the transportation system in Lagos State is such a nightmare.

To be fair, I am shocked to see educated Lagosians stand up for Mc Oluomo.

This are same same set of people that have watched Lagos light rail turn to " 12 Years an elephant project " and have no problem with it.

NURTW is needed to reform Lagos transport, I support

McOluomo is at best the person your field market researchers go to collect insights on NURTWs impact on road transportation, not your keynote speaker at an intellectual discourse.