A graduate of Obafemi Awolowo University (OAU) identified as Moradeun sadly lost her life after a hospital denied her treatment because she wasn’t with a police report.

Moradeun was reportedly attacked by robbers on her way from work. They stole her laptop and stabbed her in the neck. She was immediately rushed by bystanders to a hospital in Gbagada, Lagos but the hospital refused to treat her without a police report.

Unfortunately, before they could transfer her to a new clinic or get a police report, the lady already lost her life.

@segalink 1. what would you do if you were me. A young lady was on her way from work yesterday around past 7p.m in Gbagada

3. By standers saw everything and rushed her to R. Jolad hospital in Gbagada, where the doctors did NOTHING but refer her to Gbagada general Hospital because there was no police report@segalink @Gidi_City

@segalink @Gidi_City 5. the young lady is DEAD because some doctors at R Jolad Gbagada decided a police report is more important than saving a life. 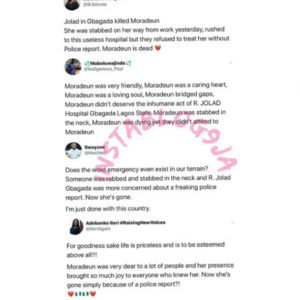 Also in recent news, popular broadcaster Binta Badmus lost her life after a clinic in Ikotun, Lagos gave her a wrong injection. This was reported by her close friend and colleague David Hundeyin.

#JusticeForJemima: Nigerians react after man narrates how his sister was left to die by hospital demanding ‘police report’

Nigerian Man Locked Up, Extorted By SARS Because He Is A Software Developer