Paul Pogba and wife have taken time off parenting responsibilities as the pair were sighted together at an Ivy restaurant.

According to a report by the Sun, The 25-year old took his Bolivian model girlfriend to an Ivy restaurant in Manchester to celebrate the birth of their new born baby.

Recall that, it was only a few weeks ago that his girlfriend’s baby bump had disappeared fueling rumours that she had given birth.

Manchester United legend, Bryan Robson was responsible for revealing the news of the new born baby. The legend had seen him in the Dubai vacation with the squad. He admitted that the French midfielder looked quite relaxed and happy with the birth of the new child.

The couple were later joined at the restaurant by another man.  They apparently left the baby taking a nap back at home. 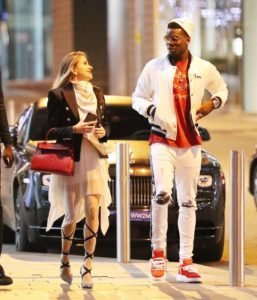 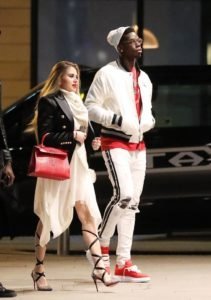 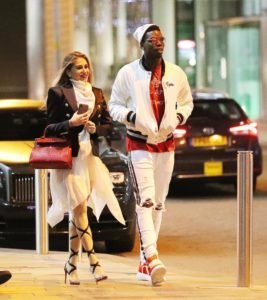 His girlfriend was spotted with the baby bump at Manchester United games with Bournemouth and Huddersfield. Worthy of note is that Pogba scored twice in each match with Salaues watching with admiration.

According to the Sun, there might have been that slight chance that the midfielder didn’t immediately travel along with the rest of the team to Dubai because of the coming baby.

‘The dabbing midfielder’ stayed back at home only to join the team days after.

The 25-yr-old midfielder who is usually social media active is yet to confirm the news of the new born baby.

All things considered, the couple are very private with their lives and relationship. Salaues first emerged onto public glare when she came to support Pogba at the World Cup in Russia.

The highly-rated midfielder has been instrumental in the resurgence at Manchester United. He has led the team to winning six out of six under Interim manager, Ole Gunnar Solksjaer. The win took them level with fifth-placed Arsenal.

Manchester United fans will be hopeful that parenting responsibilities do not distract the world star. His team’s next fixture would be one against Brighton on the 19th of January.

UpNorth-Banky W Explains How Wife Got Her Role