Nigerian musician, Peruzzi has joined the Benz Gang as he shared photos of his newly bought Benz.

He took a picture with the white Benz and captioned it “New Whip! Thank God”

Congratulating him were the DMW boss, Davido and crew including Mayorkun and other celebrities like Teddy A, IK Ogbonna, Yung 6ix and more. 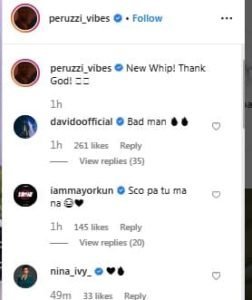 Peruzzi was also in the news some weeks ago after slapping a social media influencer, Pamilerin for trolling him months ago. However, he apologized to him and no charge was filed against him.

Actress, Angela Okorie Claps Back at Followers Who Came For Her For Wearing a Transparent Swimsuit

BBNaija 2019: Thelma and Esther fight over calling people with Down syndrome “imbeciles (video)

Peruzzi To Perform At Walays Bar On 26 January 2019