Peter Okoye of the defunct PSquare music duo blasts a follower who told him to go back to his brother to “learn how to make good music.”

This was after the singer announced that since he went solo, he’s been aging backwards. 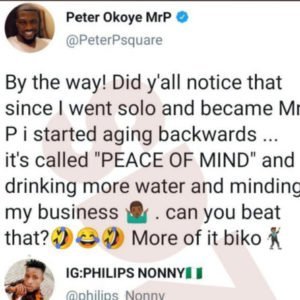 In response, a follower identified as @Phillips_Nonny on Twitter commented that he’s competing with his brother and needs to go back to him.

“To be frank bro..u are not minding ur business..u are obviously competing with ur brother..u need to go back to him, learn how to make quality/ good music…not all these yeyeye shits u v been releasing since u guys separated.”

In response, Mr. P slammed the troll, he wrote; “broke people thinking they have opinion ???? hustle make you no go dey advice Dangote how to do business. ?? chai!”

Broke people thinking they have opinion ???? hustle make you no go dey advice dangote how to do business. ?? chai! https://t.co/NNaqE9oHpv

Viktoh Blasts Troll Who Accused Olamide Of Using His Destiny

BBNaija: Peter Okoye (PSquare) Reacts To Fans Telling Him Not To Give Tacha Any Money