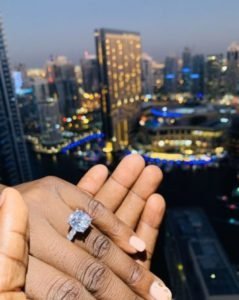 The Lagos based influencer who is currently in Dubia announced that he started dating his girlfriend 11 weeks ago.

“Shhhhh… Guess who is out of the Market now ? Bye bye to single boys gang.

I asked her to be my Mrs Adegoke, and she responded by saying, she wants to be my Forever and Ever.”

He also shared a picture of his fiancée, Motun, praising her:

“I could not have asked for a better partner, God gave you to me on a platter of Gold. You are the best gift any man could get. Just look at me, Pamilerin of Mushin, ninja turtle, you did not look at my flaws and mistakes, you decided to walk this journey of forever with me,” he wrote. Many have reacted to this news as they congratulate him. However, some are sceptical that it could be a prank.

See some reactions below:

You proposed to someone after dating for 11 weeks…That is approximately 3 months.??

Pamilerin has proposed to his fiancée he dated for 11 weeks in Dubai ❤.
This is the real "Us vs Us" pic.twitter.com/89RzfmfP9S

My mans got his Benz this year.

Congratulations to Pamilerin and 15348 others that found their right partner this year.

The rest of us, Aluta continua.

E be like say Pamilerin carry me goal-goal sha. pic.twitter.com/XOFKAJqrGJ

Pamilerin joke a lot and unpredictable. Until I see aso-ebi?
Congratulations it will end in joy.

‘Android Drake’ Trends On Twitter as Nigerians Blast AKA

“Stupid Man, Everything I Buy With My Money Is A Big Deal” – Uriel To Troll

Come to Nigeria And Have Huge Returns on Your Investment, Buhari Woos Dubai Investors

“FBI Kidnapped My Client, The US Had No Authority To Take Him” – Hushpuppi’s Lawyer Says