Actress Princess Shyngle has re-announced her engagement to her fiancé, Frederic Badji.

Like all relationship, the two have been through some downs and a month after their engagement, Princess Shyngle broke it off and shamed him publicly by sharing a video of him begging her.

There were also rumours that he was arrested for fraud. However, the two are now in good terms again.

In her recent post, she revealed how their love story started with a DM she received from him. Although she wasn’t sure if she should reply it then, her followers encouraged her to and 5 months after she replied, he proposed.

“Only my real followers will remember this . 8 months ago I posted this dm on my page from a total stranger and it caught my attention because it was the sweetest dm I ever received even though the person that sent it didn’t have a profile pic or a single picture on his page.

See His Message To Her: 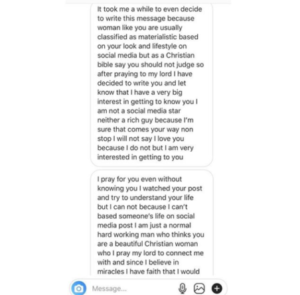