Psquare’s younger sister, Mary Okoye has revealed that her marriage to Nollywood actor, Emma Emordi is over.

This was disclosed in her response to a facebook post which reads- ‘YOUR EX IS GOOD AT?’

In response, the sister of the defunct music group wrote;

“Sleeping around and stealing…. so he is good for nothing and useless to his family and the world.”

“It’s out of experience, wait until you marry a man who will infect you with STDs, stole all you ever worked for…you catch him in bed with another woman and then he will tell you he gained nothing from the marriage even after giving him a son.” 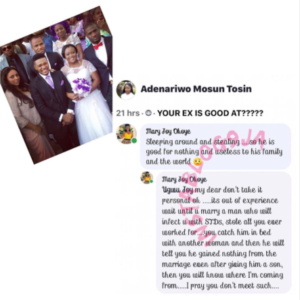 Mary Okoye and Emma Emordi got married in 2014 at an event that took place in Asaba, Delta State.

Lady Takes Her Life After Ex-husband Marries Neighbour, Flees With Their Two Kids