Regina Daniels’ sister, Destiny Daniels replies a troll who told her in the comment section not to marry an ‘old man’ like her sister.

19 year old Regina Daniels is married to 59 year old Ned Nwoko, a politician and billionaire, this has sparked a lot of controversy on the internet.

“No marry old man like your sister bcos of money you hear?” the Mr adviser wrote.

“You that you are young,your own is to be posting engagement ring because all the girls you proposed to didn’t accept your foolishness simply because you’re broke.

“Pls make money let young girls marry young guys. Mtchwww,abeg next time don’t come to my page and start spitting trash because I wouldn’t care if you’re older or not.” 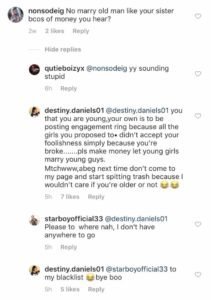 3 Most Controversial Nigerian Celebrities At The Moment