The tragic death of missing Adewura Latifat, a 26-year-old lady who was declared missing on May 15 by her cousin on Twitter, has continued to generate a lot of sympathies online.

Sonourous singer, Runtown has joined hundreds of Nigerians to mourn the death of Adewura and sent a message of prayers to the family she left behind.

‘to say that I am saddened by the news of Adewura’s death is an understatement. A manhole? Whose responsibility was it to ensure that it was covered? Who should be held accountable? This was an avoidable loss. Sending strength and love to her family and loved ones’. 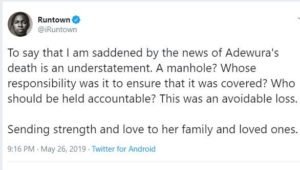 Jaywon Gets An Early Birthday Gift For Himself

Nigeria has recorded 62 new cases of #COVID-19 in the last 24 hours. The Nigeria Centre for Disease Control (NCDC)