The cat and dog relationship between controversial Journalist, Kemi Olunloyo and musician, Davido is set to continue, as the journalist has launched another scathing attack on an individual related to the musician.

Idonsabi reported that the controversial journalist called out Davido’s third babymama, who she described to be a thief.

This time the hammer of Kemi Olunloyo landed on Davido’s girlfriend, Chioma. Kemi said that Chioma has nothing, owing to the fact that Davido has not given her a ring or even a cooking show.

The controversial journalist also pointed out that Chioma should go back to school. Read her post below;

“This morning I told you that Davido’s THIRD BABYMAMA Hermadine A.Samlan aka Amanda Mama Hailey shoplifted in America years ago. It was to teach Chioma a lesson. Obviously, nobody noticed. You sit near a man who hasn’t empowered you after you dropped out of school. No Ring, no cooking show, just jet setting all over the world doing nothing and living lies. No Porsche, you can’t even drive Chioma. Hermadine graduated in Political science with a Bachelors degree, Davido opened a business for her and she’s turned a new leaf. Chioma get YOUR PAPER. Do something for yourself and stop sleeping next to Tobechukwu. Ladies don’t leave school for a man. Get your Education.” 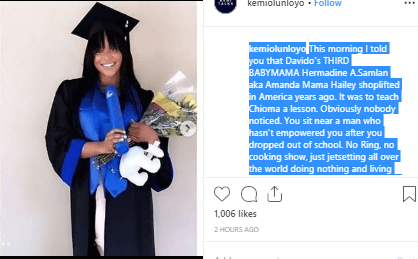