Nigerian rapper, Speed Darlington gave a hilarious response after a follower asked why he was not featured on Beyonce’s Lion King album.

“Speedy why are u not on Beyonce album, a whole you Africa king #LionKing” the follower asked Speedy.

“I don’t kiss ass I come from a pride tribe we all know who mop floor with their body. #EnoughSaid,” He responded. 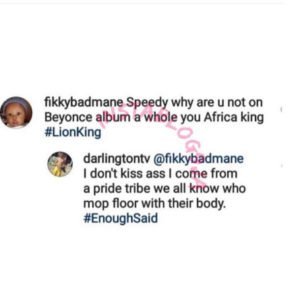 Also in the news is Toyin Lawani who announced whom she will be voting for this season of Big Brother Naija.

BBNaija: Viewers React as Frodd Pulls Down Underpants While In Bed With Esther (Video)