Disney’s Queen Of Katwe star, Nikita Pearl Waligwa, has passed away at age 15.

It was reported that the Ugandan teenager, who debuted in the 2016 Disney film (Queen of Katwe) about a chess whiz, died of brain cancer.

According to reports, the young girl had been battling with brain tumor since 2016 and she was better after a medical treatment in India. However, her health relapsed recently.

Her death was announced on Sunday by Gayaza High School, an all-girls boarding school outside the Ugandan capital of Kampala where Ms. Waligwa had been a student.

“Fare thee well Nikita Pearl Waligwa. You were a darling to many and we have lost you to brain tumor at such a tender age,” the school’s tweet read. “Rest in Perfect Peace dear.”

Nikita in “Queen of Katwe” played Gloria, a friend to the protagonist, Phiona Mutesi, who was played by Madina Nalwanga.

The movie tells the true story of Phiona Mutesi, an Ugandan chess whiz, how she became a chess whiz with help from Gloria and under the tutelage of Robert Katende, played by Mr. Oyewolo. 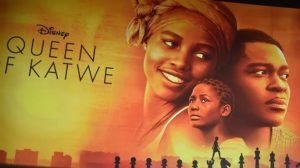