We reported earlier that Patrick called out Peruzzi and his new boss, Davido on a Twitter thread he tagged #SurvivingPeruzzi

Read More>>> #SurvivingPeruzzi: Peruzzi’s Former Boss Calls Him Out Over Breach Of Contract, Reveals How He’s Once Ambushed Him

He stated in the post that Davido and Peruzzi are owing him money as he (Peruzzi) breached the contract he had with his record label by joining the DMW team.

Patrick also mentioned that Davido “didn’t really sign” Peruzzi to DMW as he referred it to “audio sign.”

He also claimed that Davido’s hit singles like FIA, Mind and Risky were recorded by Peruzzi for his record label, GoldenBoy Ent. and Davido never paid him for it.

Just to clear the air, @Davido Owes Me as Much as @Peruzzi_VIBES does. Fact – the song FIA, Ada, Mind, Risky were recorded by Peruzzi for Goldenboy and are all Owned by Goldenboy… DAVID NEVER PAID ME cc @sonymusic. Instead he took me off royalties. Listen!?? #SurvivingPeruzzi pic.twitter.com/KUGUwici1D

Reacting to his long thread on Twitter, Davido wrote in a post he soon deleted; “#SurvivingPeruzzi, one of the best things that ever happened to me and my career!!! So if there’s a problem, it’s u my guy!!!” 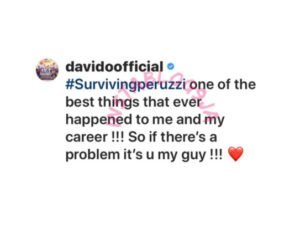 Tiwa Savage Makes A Return To Twitter After 2-months Hiatus