Ex BBNaija housemate, Tacha drags Nigerian singer, Skiibii after he messaged him months after she asked for his support while in Big Brother Naija House and he ignored.

The reality TV star had messaged him then on Instagram  that she needed his support and would be needing his help. However he didn’t reply the message.

Related: ‘This Is Sheer Wickedness That Cannot Be Overlooked’ – Tacha Reacts After Cynthia Morgan Narrated How She Lost Everything To Jude Okoye

In recent update, he messaged him asking if they “are fighting now?”

Tacha then made a screenshot of the message and posted it on her Instastory with the caption, “How convenient.”

She added; “sometimes we expect more from others because we would be willing to do that much for them.” 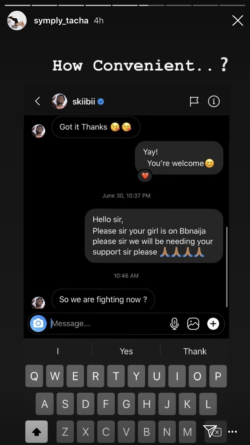 BBNaija: Ebuka Reacts To Allegations That He Was Responsible For Tacha’s Strike