Ex BBNaija housemate, Tacha has issued a letter through her lawyers to Blessing Okoro suing her for defamation of character and demanding N20 million in compensation.

The relationship blogger has been dragging and bullying the controversial housemate on social media, calling her sorts of name.

Recently, she got into a conflict with some men in Enugu who hit her car during a road rage.  However, she made a video claiming that the men were assassins sent after her by Tacha.

In the letter, Tacha demanded an apology within 24 hours and the sum of 20 million Naira in damages.

See the letter below: 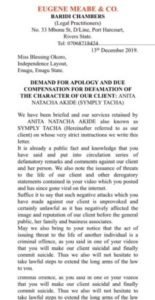 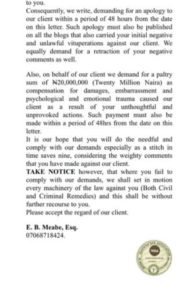