Ex housemate, Tacha who was disqualified after a fight with Mercy has written an open letter to the BBNaija finalists – Mercy, Mike, Seyi, Omashola and Frodd.

In the letter personalized for each of the housemate, the brand influencer congratulated them on reaching the final week and stated that she wished she loosened up a bit and reacted to situations differently.

However, for the bliss of her mind, she said she has decided to let go of everything and the letters are things she would love to let the 5 know before leaving the house. The 23 year old also said she hopes they will be on good terms after the show.

See The Letters Below: 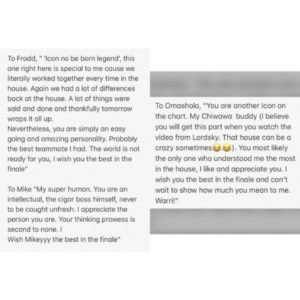 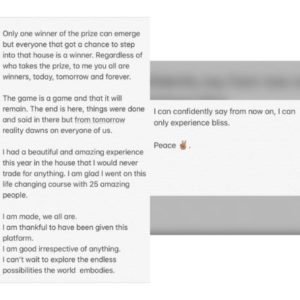 BBNaija: Ka3na Slams Nengi, Says She Was A Confused Follower And Not A Leader

Lolu Shows Off Girlfriend As She Marks Her Birthday (Pictures)