A viral video of Nigerian singer, Tekno in a transparent truck with semi nude girls dancing along Lekki-Epe expressway has gotten lots of reactions on social media.

It was earlier reported that Nollywood actress, Belinda Effah called upon Nigeria Government as she wrote that the sight is inappropriate, especially for kids.

However in a new post, Tekno apologizes and said the truck wasn’t for a strip club advert as many had assumed but for a music video. He said the vehicle was just used to convey people to the next location and never his intention to offend anyone.

Read His Statement Below: 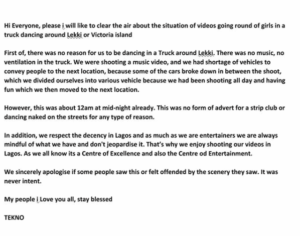 Marriage is not an achievement, I did not go to school just to get married – Uriel Oputa