Before the Milan derby was over, Lukaku had his say; by adding Inter’s second on a night that showcased their ambition to wrestle the Serie A title from Juventus’s grasp. The big Belgian is proving his doubters wrong -game by game- and while that is good news for the blue half of Milan, it spells bad news for the red half of Manchester. Let me make this clear: Man United selling Lukaku is not the mistake, not getting a replacement is.

Towards the end of his time at Old Trafford, Lukaku faced a lot of criticism about his game. People talked about his infamous first touch, his declining pace, his weight and even his composure in front of goal. The one thing he was never accused of was not being able to score. Lukaku scored over 40 goals in the two seasons he spent at United; averaging about 20 per season. For a striker who didn’t always start, that’s not bad. Better than Welbeck who scammed everyone at Arsenal for years…but that’s another story.

I cannot understand how a club like Man United can decide to place their goalscoring burden on Rashford (who is a 15-goal striker at best), Martial (who can do slightly better) and Greenwood (lol…this kid is 17! and they think he could be another Rooney/Owen? in 2019?). The club even let go of Alexis Sanchez, an experienced forward who can fill in as a central striker. The team was always one injury away from being toothless. Seems they have reached that point today. Martial, Greenwood and Rashford are all at the physios at the moment. Little wonder that it was West Ham doing the scoring yesterday. 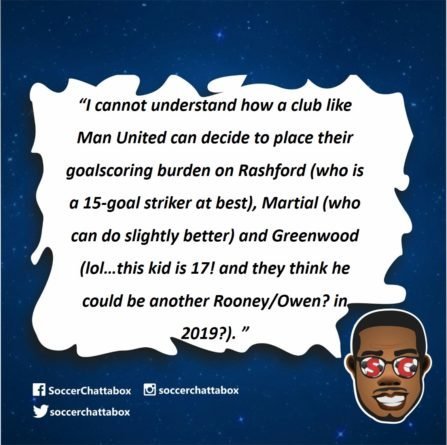 During the summer, striking options were in vogue. Arsenal broke their transfer record to sign Pepe. West Ham got Haller while Newcastle got Joelinton. Everton signed Moises Kean, Aston Villa bought Westly and even Sheffield United broke their transfer record TWICE to sign both Mcburnie and Robinson. For the likes of Tottenham, Liverpool, Man City and Chelsea, signing a new forward was not really necessary; because they didn’t sell any of the existing ones. Chelsea may have sold Morata but Tammy Abraham was lined up to replace him long before the move to Atletico Madrid was made permanent. In Man United’s case, selling Lukaku without a replacement either shows a lack of ambition or a clearly misguided belief in what they have.

For a manager who made his name as a clever striker, Ole Gunnar Solkjaer hasn’t proven to be very clever this time. After being close to losing Pogba (which would have been a disaster because he can’t be replaced immediately), 80 million pounds was spent to get ANOTHER centre-half (Man United have Bailey, Jones, Rojo, and Tuanzebe in the squad). After Shaw, United’s left-back backup is…ASHLEY YOUNG. Finally, as earlier stated, the guy penned down to replace Lukaku’s goals is a 17-year old. SMH.

I fear for this team. I fear for Solkjaer. I fear for Man United. Maybe they’ll prove me wrong down the line but I don’t know if the manager has that time luxury. Goodwill can only get you so far. Goals win games and you need enough goalscorers to ensure you always score goals. Solkjaer should know this better than anyone else. Again, I must repeat, Man United selling Lukaku is not the mistake, not getting a replacement is.