Blogger Stella Dimokokorkus popularly known as SDK and Tonto Dikeh are in a fight on Instagram as both trade hot insults.

The two started throwing shades at each other after SDK posted about Tonto Dikeh’s arrest in Dubai. It escalated after Tonto Dikeh then accused SDK of being jealous of Linda Ikeji.

SDK responded saying the jealousy was positive and she ‘doesn’t beg around‘ like Tonto Dikeh. She also accused the actress of slandering Toke Makinwa and depending on Bobrisky’s money to live a luxurious life.

The actress refuted the claims asking the blogger to prove her claims by dropping ‘receipts’ and threatened to drop their secret ‘chats’.

Again, SDK went on to accuse her of owing her N200k, of sleeping with Toyin Abraham’s ex husband while they were married, of snatching Ini Edo’s boyfriend and many more allegations. 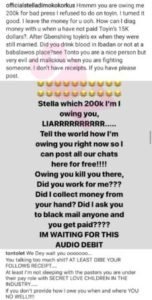