Nigerian actress, Tonto Dikeh revealed a reason she hated her ex’s mother. The actress who was formerly married to Olakunle Churchill posted that she surprised their son in school. She wrote;

”I sha wokeup from same bed with this Little man oo. But Look at how he push me down for surprising him in school. #Quick Mom errands and Back to 5more meetings for the day. #Lord I need your strength and Grace.

#BUT THIS BOY HAS NO RESPECT OOO,THROWING MY MILLION DOLLARS BUM BUM ON THE GRASS LIKE ITS BALL SMH(a prophet is not honored in his own town)”.

A follower then commented that he believes the Tonto’s son will always pick her over his wife.

Tonto Dikeh responded that she would never be in he and his wife’s faces as she hated her ex’s mother in law for the same reason. 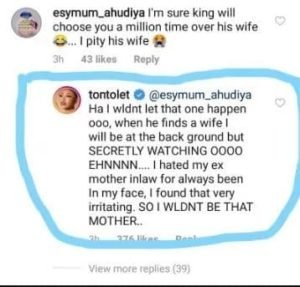 Man Shares Outrageous Bride Price List Given To His Relative By The Bride’s Family in Mbaise, Imo State