As far as football is concerned, the referee is a demi-god on the pitch. Whatever he/she says goes, no matter how absurd it may seem. He cannot be questioned by the players, the only person who can talk to him apart from his assistants is the captain of either side. However, if he is disrespected, verbally or physically he can punish the player with a red card. A very recent example, is Micheal Oliver red carding Buffon for dissent, during the UEFA Champions league Quater Final match between Juventus and Real Madrid.

At the moment, the English referee is the most unpopular in the world of football. Now sentiments aside that was the right call, and a brave one at that since it seemed to be the unpopular decision. The world wanted to see another big come back; sports analysts and pundits alike threw a fit of tantrums when their dream was thwarted.  Today, however, we shall not be talking about an unpopular referee; we shall be talking about the Top Ten Greatest Referees in Football History. 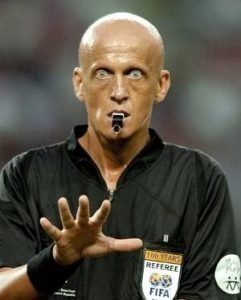 If you’ve followed football long enough, you’d know this guy, due to his distinctive features. The Italian referee suffered from a disease called alopecia which caused him to lose all facial hair. He has won the IFFHS World Best Referee of the year award a record 6 times consecutively, from 1998 to 2003. He’s also won the Italian Serie A referee of the year award 7 times.

Luigi became a FIFA referee from 1995 -2005. He’s known for officiating in very high profile matches. Some of them include the Olympic 96’ Men’s football final between Nigeria and Argentina. He overviewed the UEFA final match between Bayern Munich and Manchester United, he said was one of his most memorable matches.  However his officiating in the 2002 World cup final between Germany and Brazil was the most memorable for me. Pier-Luigi Collina is an unpaid consultant for UEFA Referees committee currently. He is widely regarded as the best ever referee of international modern football. One thing is certain though, the history of football will never be complete without mentioning his name.

Markus Merk became a Bundesliga referee at the young age of 25, making him the youngest person to achieve this status, this was in 1988. He’s also won the DFB German Referee of the year a record six times and IFFHS World Best Referee of the year award, three times. Merk is one of the best referees to have come out of Germany. And the fact that he holds the record for the most officiated Bundesliga matches lends credence to this fact.

Markus Merk is one of the top ten Greatest Referees in Football history. Some of the high profile matches the German has refereed include UEFA Cup Winners Cup Final in 1997, 2003 UEFA Champions League final and EURO 2004 final, just to mention a few. Markus Merk is a dentist by profession but stopped practising in 2005, in protest to a German government policy. At the moment Markus Merk is a pundit for Sky Deutschland. He’s also a motivational speaker and philanthropist.

Webb is arguably one of the best referees to come out of England and the English Premier League. He was a FIFA referee from 2005 to 2014.  Webb’s father was a referee for 35 years, though he didn’t get to the pinnacle of refereeing in the world. This might have been what had inspired Howard Webb to become a referee. Prior to becoming a ref, the Englishman was a police officer (a sergeant) with South Yorkshire police. And he had to take a sabbatical from the force when the demand of referring became much.

Webb created a record when he refereed two high profile final matches in a single year. He was the referee for the UEFA Champions League final and the FIFA World Cup Final all in 2010. He was the first referee to achieve this feat. Howard Webb retired from active refereeing in 2014, now he’s the Manager of Video Assistant Referee Operations for Major League Soccer’s professional Referee Organisation. Howard Webb is touted as being the best referee to have come out of England; though some say Mark Clattenburg- another English referee has surpassed him. 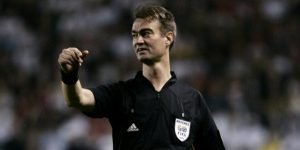 Just like Luigi Colina, Nielsen is also very conspicuous to lovers of football. No, he doesn’t have a rare skin condition, what stands him out is his long neck and his height.  Nielsen is 6 ft 6; very few football players are that tall. Kim-Milton Nielson is from Denmark, he is an IT manager by profession and a retired referee. He started refereeing at the age of 15, and he would ref professionally till he reached 45 years of age. Nielson has refereed 154 international matches, and 53 UEFA Championship League games. Some high profile games he has been involved in included in FIFA 2011 semifinal match, between Brazil and Turkey, and three UEFA Champions League Finals, in 2003, 2004 and 2005. He retired in May 2006, after officiating in the last game in Danish Superliga Championship.

Sandor Puhl is from Hungary and a retired referee. He’s IFFHS World Best Referee title winner from 1994 to 1997, therefore he’s considered one of the best referees in the world. His refereeing career though hasn’t been without it down times too, as he was suspended by FIFA for 8 international matches. This was due to his negligence in the 1994 quarterfinal match where Italy played Spain. He was a referee in the Hungarian professional football league from 1984 to 2000 and then FIFA listed from 1988 till 2000. His high profile matches include USA ’94 Final match between Brazil and Italy and 1997 UEFA Champions League Final Borussia Dortmund vs. Juventus.  After retiring from football in 2000 he became the Deputy Chairman of the Hungarian Football Association, he served in this capacity for six years. Sandor Puhl is no 5 on our list of Top Ten Greatest Referees in football history.

This is the second Danish man on our list. Apart from being a one-time FIFA listed referee and also a Danish Superliga referee; he’s a human resource personnel. Mikkelsen was born in May 1960. He was a FIFA listed referee from 1985 to 1996, and also a Danish Superliga Referee from 1985 till retirement from active refereeing in 1986. He gained nationwide recognition in the sport when he refereed at the world cup in Italy 1990; he was just 30 years old. Another accolade he has won is winning the International Federation of Football History and Statistics (IFFHS) award for best Referee from 1991 to 1993. Peter Mikkelsen works in the Human Resource Department of F-Group a company based in Denmark, he is also a teacher. 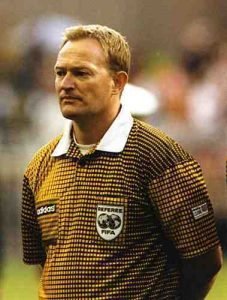 In 1986, Dino Viola, the then Roma President was indicted in a match-fixing scandal. Mr Viola had attempted to bribe French referee Michael Vautrot with 50,000 Euros, in a Roma match against Dundee United. This earned Dino Viola a ban from UEFA. As a FIFA referee, the French Michael Vautrot has officiated 5 high matches at the world cup. Two matches in 1982 and 3 matches in 1986, in this same year he refereed the EURO cup final between FC Steaua Bucharest and FC Barcelona. He is a two-time winner of IFFHS best referee award. Michael Vautrot has been considered one of the best referees out of France and it is not difficult to see why.

Pedro Proenca refereed a good number of matches at the 2014 FIFA world cup in Brazil. The Portuguese coach has been regarded as one of the best in this field of officiating matches. He was the first referee to referee both the finals of UEFA European Championship and UEFA Championship and then also Portuguese Super Cup and Cup of Portugal. He overviewed these matches all in one year, being the first referee to achieve such a feat. Proenca has won IFFHS best referee of the year three times, in 2007, 2011 and 2012. He has also been named twice best referee of the year by the Portuguese Football Federation. Pedro Proenca was listed as a FIFA referee from 2003 to 2014 and then, and he was also listed in UEFA Elite Category in 2009. So here’s is an accomplished referee by all standards and he makes number 8 on our list of Top Ten Greatest Referees in Football History. 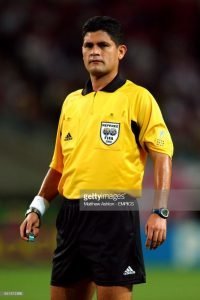 Oscar Ruiz is from Colombia, and he’s the only non-European on our list of Top Ten Greatest Referees in Football History. He’s a lawyer by profession and also at this moment a retired referee. Ruiz became a FIFA listed referee in 1995 until 2011 when he retired; he officiated in 2002, 2006 and 2010 FIFA World Cups. When he retired, he became a member of CONMEBOL’s referee assistance program. At the moment though he’s serving as a FIFA instructor, Oscar Ruiz is regarded as one of the best Colombian referees of all time.

Frank De Bleekere is a multiple award-winning referee from Belgium. He actually wanted to be a footballer, but injuries kept him out of play several times, he opted for refereeing job. He became a FIFA listed referee in 1998, that’s after 14 years as a referee. He retired in 2011 and served as one of FIFA’s Refereeing Technical Advisor.