Africa is blessed with so many rich cultures which originate from various tribes. Among the nations blessed with breathtaking tribes is Nigeria. In Nigeria alone there about three hundred different tribes but are under the three major tribes in Nigeria which are Yoruba, Igbo, and Hausa in no special order. Buckle up and be prepared to have your mind blown as we take you on a trip to the north most especially about two special tribes found in Zamfara state. Enjoy! 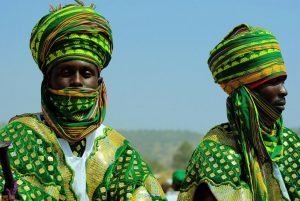 The Hausa tribe is one of the major tribes in Nigeria as well as the biggest tribe in the whole of West Africa. This tribe is very popular and influential occupies the Burkura part of Zamfara. As a result of the influence level of this tribe, most other minority tribes in Northern Nigeria have adopted their traditions and cultural values.

The Hausa are farmers and predominantly Muslims. People from the Hausa tribe do not only exist in Nigeria. There are Hausa people in other parts of Africa also. There are no clear details about the history and origin of the Hausa people. However, it is believed that these people originated from the Middle East. This is because apart from the fact that the Hausas are Muslims, a lot of their beliefs are in line with beliefs of the Arabs.

Hausa men are known to dress in flowing gowns known as Babban riga while their women tie wrapper on blouse and cover their heads with hijabs. The people of the Fulani tribe have a lot in common with the Hausa and are often mistaken for Hausa by people from southern Nigeria. The Fulanis are nomads and are known for rearing cattle across the country. Fulani men wear flowing gowns that are called Babban riga while their women tie wrapper on a blouse and put on the hijab. Fulani women are known to be slim and exception    ally beautiful. Meals eaten by this people are usually made from maize and millet.

In conclusion, there are lots of facts about the tribes in Nigeria that have not been put into writing. They have only been passed from one generation to another orally. As a result of this, without direct contact with many of the minority tribes in Nigeria, absolute knowledge about them, as well as their way of life, might never be understood.