Twitter is set to ban all political advertising worldwide.

The announcement was made by Twitter CEO, Jack Dorsey on his official Twitter page. The CEO believes political support  “should be earned, not bought“.

“While internet advertising is incredibly powerful and very effective for commercial advertisers, that power brings significant risks to politics.”

Thid ban will be enforced from 22 November, and full details released by 15 November.

“A final note. This isn’t about free expression. This is about paying for reach. And paying to increase the reach of political speech has significant ramifications that today’s democratic infrastructure may not be prepared to handle. It’s worth stepping back in order to address”, Jack added.

See his full tweets below; 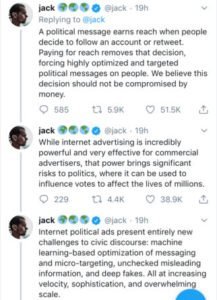 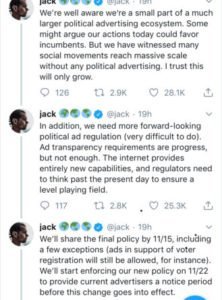 ‘Church Of Satan’ Educates Man Who Wants To Join Illuminati