Ex BBN housemate and chef, Uriel slammed troll who shamed her for being celibate and not having a car.

‘Celibacy make u not have a car?’ the troll wrote.

‘Shut up you goat…very silly and stupid.. I don’t measure success by car. How about this, I’m taking care of my family. Car will come, have you even left your state?’ Uriel wrote. 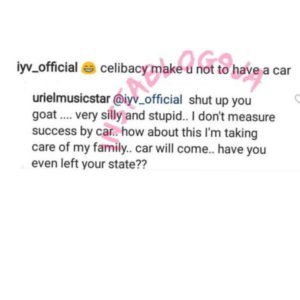 Also in the news, Uriel who is an Indomie Ambassador is joining Indomie to reward housemates who have maintained and nurtured great friendship in the house.

“BBN never fails to serve us friendship goals♥ Last year it was Miracle &Tobi!!! This year it is an all female line-up; Mercy & Diane, Tacha & Khafi?‍❤‍?.

“I’m excited about this even more because Indomie Giant pack celebrates friendship; now it’s up to you to decide which of these pairs deserve an award from Indomie Giant pack??!!! Reply on Indomie’s page using the hashtag,” She posted today.

Nollywood Is Not Responsible For Failed Marriages Among Celebrities – Ronke Ojo

Gifty’s Existence Is Tied To Me – Mr 2Kay

BBNaija: Ike and Mercy Emerge as Head of House For The First Time