— Viral photos surfaced online as a man married two wives at the same time, on the same day.

Nigerians react as a man married 2 women on the same day.

People are normally criticized when they marry more than one wife especially if their religion forbids it.

However, even religions like Islam that allow men to take more than one wife do not marry time at once or at the same time.

It was funny when a man was seen with two brides on their wedding day. These two women seem to be satisfied that a man is marrying them at the same time.

In the photos, they were seen in White wedding gowns, in another they all raised their marriage certificate up in satisfaction. 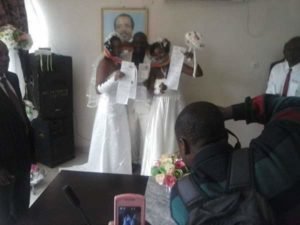 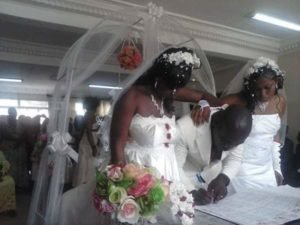 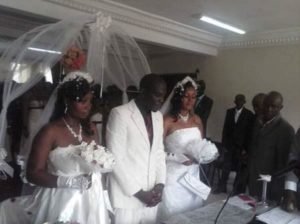 Chris Attoh: See the face of the man that shot his wife, Bettie Jennifer (Photo)

Teddy A Responds To Allegations Of Beating His Wife, Bambam

AKSU Student Suspended For Calling Her VC Foolish on Facebook